Home » Blog » Mentoring: How to make the most of it…

Mentoring: How to make the most of it… 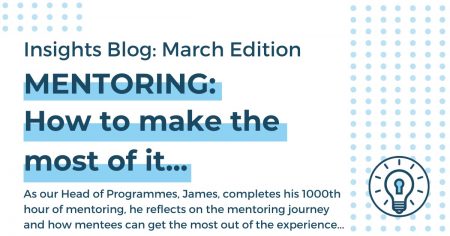 Oxbridge mentoring in the press naturally features stories of students triumphing against the odds, excitedly talking about offers from their dream university and thanking the mentors that helped them achieve it: “60 students make Oxbridge offer thanks to mentor” leads The Times, “Mentoring opens doors to Oxbridge” states Hertford College Oxford’s official blog. As the Head of Programmes for a charity at which we are proud to have a 40% Oxbridge applicant success rate over the last 3 years on our Oxbridge Mentoring Scheme (OMS), I recognise the power of mentoring exemplified in these headlines and I have seen it transform students’ academic and personal lives. Publicity about mentoring is often orientated around results though and, in many ways, this undermines what it is and what it involves. So today, I want to talk not about results, but about the journey of mentoring and how the process can be done successfully from my experience of it (as I approach my 1000th hour of mentoring).

When talking about a journey, the best place to start has to be Homer’s Odyssey –the first proper journey on record – which details Odysseus’ return home from the Trojan War (can you guess I studied Classics yet?). As Odysseus is making his way back, the goddess Athena appears to his son Telemachus in the form of an old friend to offer him support and guidance; that friend’s name is Mentor. To quote Mr Portokalos from My Big Fat Greek Wedding – “our word is from the Greek.”

In My Big Fat Greek Wedding, Mr Portokalos always goes on a digression about how a word is linked to the Greek, so please bear with me as I do the same. There’s also a Greek word called “menos” and it’s this which Athena says she will instil in Telemachus. If you ever decide to pick up a translation of the Odyssey (which would make me very happy), menos is usually translated as “strength” (I agree with Gregory Nagy – Professor of Classics at Harvard – that this translation is rubbish!) Menos, if we want to get down into it, is that feeling of power you get when you do something. For me, “mental fortitude” or “resolve” would be a better translation. So, at the end of this Greek digression, my point to take away is that 3000(ish) years of history suggest mentoring has always been far more about a friend helping you to be your best self; a mentor is someone who maximises your resolve and determination by bringing out your potential rather than being a teacher with a set way of doing things. Wait, does this also mean that your mentor on OMS is a god in disguise?? Let’s move on.

A common sentiment about applying to Oxbridge from a socio-economically disadvantaged or underrepresented ethnic background is that it can seem like a mountain of a task. How can a mentor successfully help with this and what is your role as a mentee? If Oxbridge seems like Everest now, then your mentor is a Sherpa. We know they have trodden the path successfully before and can do it again. They know the right route and are there to make sure you find it too – along the way, they can even do some of the heavy lifting for you if you need it. However, climbing the mountain is far more of a test for the first-time climber than it is for the Sherpa. As a Mentee, you wouldn’t rock up at Base Camp in a t-shirt and shorts having spent the last two months binge eating and watching TV. I encourage you to treat mentoring like you would the mountain, if you start training now and you prepare yourself for the fact this will at times be hard, that you might question why you are doing it, but that you want to persevere and to challenge yourself, you will have the best chance of success. Read, listen, practice and do things – this goes a long way and the earlier you start in earnest, the better. It is why we begin our mentoring programme months before you apply.

That’s probably enough analogies for now! Let’s talk about mentoring directly. To do this, I sat down with Akshar (History & German), Libby (Medicine) and András (Mathematics). All three are former mentees on the OMS, who are now studying at Oxbridge and have become mentors for OMS (Circle of Life from the Lion King can be heard faintly in the background). I asked them about their experience as mentees and what they look for as mentors. Here’s what they said.

What do you wish you’d known about being a mentee before you started OMS?

[Akshar]: I wish I’d known my mentor isn’t like a professor, they’re like an older sibling. We talked about going on holiday, drinking beer and sometimes being late for lectures – they weren’t someone to be scared of and I wish I’d not been so afraid to ask them questions in the first couple of months.

[András]: I thought everyone else would be ahead of me and I’d be one on one in this process. The way OMS has groups was great because it allowed me to see we were all in the same boat and that when you stop thinking everyone else is ahead, you realise you have a lot more in common than you have dividing you.

[Libby]: I was worried I wouldn’t come across as ‘Oxbridge material’ either due to my background or ways I answered questions, which looking back was ridiculous as the whole point is to be mentored – there is zero expectation to be a star candidate straight away.

Were your expectations of OMS fair?

[Libby]: It sounds cliché but OMS was better than I expected! I found it so useful to have someone with knowledge of Oxbridge and the process who I also felt comfortable going to with any questions/worries my school couldn’t answer.

[Akshar]: The workload seemed like it would be too much, but honestly doing that extra one or two hours in March paid its dividends by summer and the admissions tests point. The work isn’t as much as it sounds like when you get into a routine and I started early, rather than leaving it to a panic over the summer like some people I know.

[András]: Whatever you expect it to be like, it’s not going to be that because it never works like that. I would honestly say just go in with an open mind because there’s always insight your mentor can bring, even if it is not what you expected. (Credit to András here for demonstrating the L section of our REAL technique by thinking laterally and attacking my question!)

What made you a successful mentee?

[András]: Do the Learning Log! I didn’t fill it in and had to panic read a few texts over one weekend – which was stressful. Also, I wasn’t afraid of failure – I found I was wrong more than I was right at the start, but accepted that and used it to better my knowledge and improve my answer, rather than taking it personally.

[Akshar]: I explained my viewpoint and how I got there in my thinking. When you come to university, there’s a lot more about what the best method or process is, rather than what’s the answer.

[Libby]: I had an open mind, wasn’t afraid to ask questions, and was willing to receive and act on feedback.

What motivated you to study?

[Libby]: My main motivation was knowing that the work I put in now would mean I would be able to study the subject I was passionate about and ultimately lead to my dream job.

[András]: Saying that the work was fun sounds very nerdy and let’s be honest, the work didn’t make me “happy” – but it did make me happy to prove to myself I could do the work and I did enjoy it, especially the feeling of accomplishment when solving something.

[Akshar]: I really liked the subjects I picked and wanted to study at university. If you make it seem too much like a means to an end, the interviewers see right through it – learning about the subject was the motivation.

How much did you study and in what ways?

[Akshar]: Maybe 1hr per week on OMS, but it’s hard to quantify because the uses of what I did on the OMS went a lot further than OMS work. When I was given a question in school, I found myself using tips from OMS in my answers. It was nice to do OMS specific stuff too in that 1hr – it felt less forced than schoolwork and was a nice change.

[Libby]: I would study in my free periods and maybe an hour or so at home per day, I found the questions in textbooks after each topic very effective to consolidate knowledge and I also used online flashcards on anki/quizlet which allowed spaced learning.

[András]: I did Maths so all of my preparation, A level and OMS, was kind of rolled into one. I did have to do specific parts like picking a college and reading about the course, and that was where the guidance from my mentor on how to study and pick was great for things I hadn’t encountered before.

What are you most looking forward to in your role as a mentor?

[András]: I’m looking forward to seeing how someone else finds the process and to giving back to help someone reach their potential like I was able to reach mine. Also, doing some easier maths questions than those I’m doing now.

[Libby]: I’m looking forward to being able debunk myths, give tips for the admissions process and just generally make Oxbridge seem more accessible, aiming to make as much of a difference as my mentor had on me.

[Akshar]: I don’t do as much source analysis during my degree these days, so I want to do it again with my mentee – OMS is really creative and allows us to explore random topics and learn from each other.

Now that you are a mentor, what skills and traits are you looking for in your Mentees?

[Akshar, András & Libby]: Engaged, can-do attitude, self-reflective, is a rounded person, hard worker. Above all, that they love the subject (at the end of the day, that is more important than the university they go to).

In summary, I’ve explained mentoring by talking about Ancient Greek myths and Sherpas. You could rightly argue that these analogies raise as many questions as they do answers, with the heavy lifting in this article having been done by Akshar, András & Libby – who actually answered questions directly. However, the mentees who thrive on OMS and with mentoring in general might consider that this article’s structure has been somewhat deliberate – as a mentor, I hope all I have done is to ask some thought-provoking questions, make a note of the answers and then used them to guide the rest of the content. To me, that is the role of a mentor. Those who thrive as a mentee might use the analogies and our mentees-turned-mentors’ advice as their own Base Camp to consider, think, reflect on the prompts. That is the power of mentoring and how you should approach this journey to get the most out of it.